17.12.2019 15:58 - "Supercomputing", Revised Selected Papers of RuSCDays 2019 in Springer CCIS, is available now
16.10.2019 16:16 - Conference photos are available now
09.10.2019 14:07 - The most session and workshop presentations are available
08.10.2019 15:39 - Conference proceedings are online now
The book contains full papers in Russian, short papers and poster abstracts included in the agenda of the International Conference "Russian Supercomputing Days". Full papers in English will be published in the CCIS Springer series later.
07.10.2019 17:17 - Presentations from the "Parallel Large-Scale Graph Processing" workshop were published
END_OF_DOCUMENT_TOKEN_TO_BE_REPLACED

Supercomputing Consortium of Russian Universities and Russian Academy of Sciences

The 5th conference is dedicated to the 85th anniversary of academician V.V. Voevodin, the outstanding Russian mathematician who made a valuable contribution to the parallel computing theory and supercomputing technologies.

The new, 31th edition of Top50 list of the most powerful supercomputers in the CIS will be announced on the first day of the conference.

The conference will be conducted in Russian and English, with simultaneous interpretation of the reports at the plenary section. 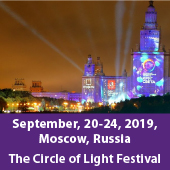